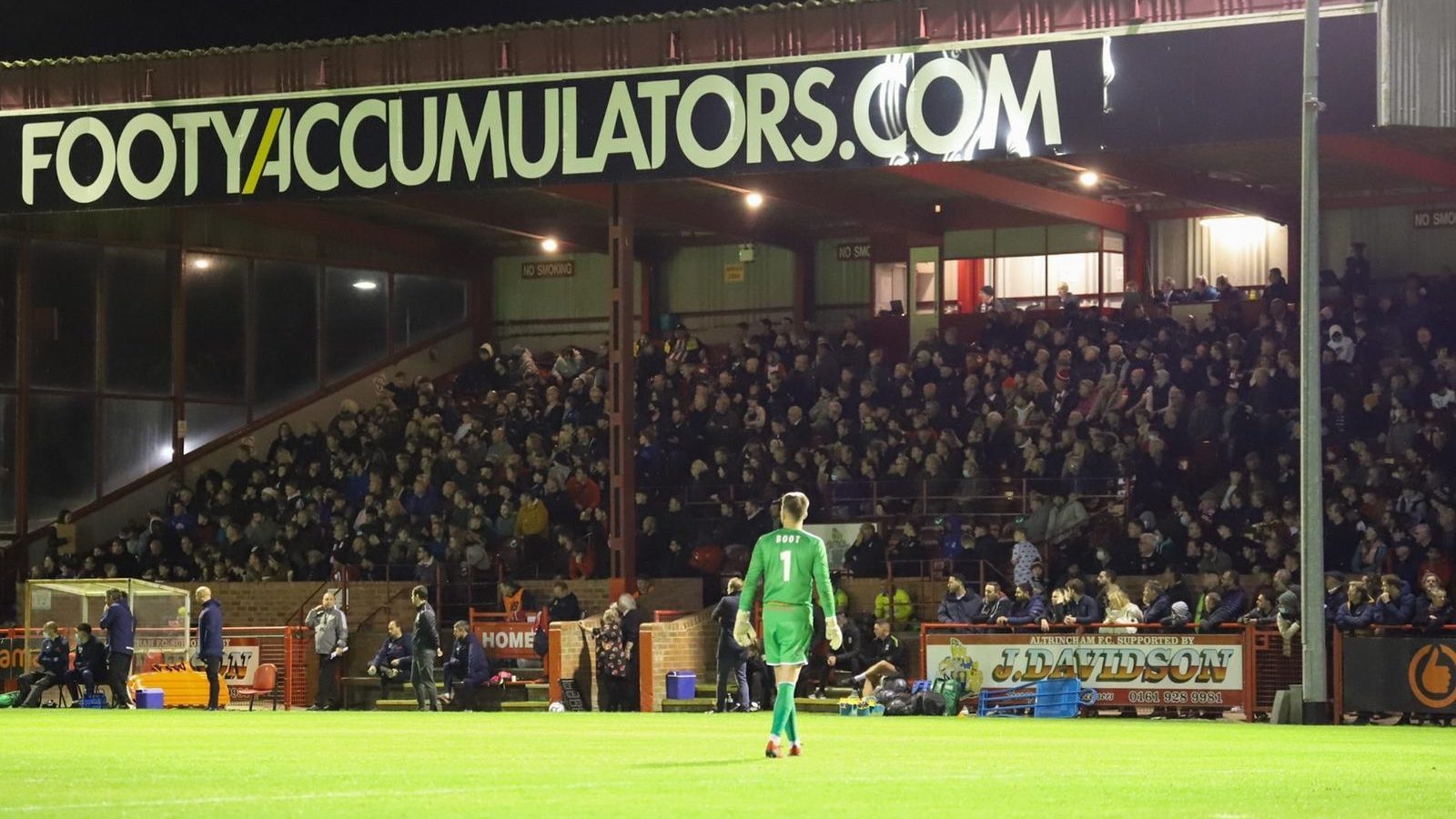 *Full house .. not a seat to be had for Alty's appearance on live TV. Picture by Jonathan Moore.

In the end, injuries and illness took their toll and proved too much for a patched-up Altrincham side, but what a triumph for the club’s Football for a Fiver initiative, with three sides of the ground packed to the rafters for the first live TV transmission at The J.Davidson Stadium for 13 years.

In launching their enterprising offer of admission for just £5, the club appealed to the wider public to buy into it and show Altrincham FC in the best possible light to a nationwide television audience, and how they responded.

By the time the BT Sport cameras started rolling on the gantry at just before quarter to eight, a quite astonishing 3,683 people were inside, and there was barely room to move in the main stand, the Golf Road or the Pop Side.

The presence of 123 travelling supporters at the away end made that terrace appear a little more spacious, but that merely served to underline the magnitude of the home turnout - something in the region of five times what could be expected for a Tuesday night game against similar opposition pre-Parkinson.

It is to be hoped the majority saw enough to be enticed back, but there is bound to be a sense of frustration, after all the painstaking planning and preparation, that injury and illness prevented Alty showing football followers up and down the country, as well as all the newcomers among the 3,500-plus home support, what they are all about.

How Phil Parkinson and Neil Sorvel would have loved to send out a starting line-up brimful of attacking flair and invention, the sort that has captivated on a consistent basis and established Alty as the best of the part-time teams in the ultra-competitive Vanarama National League.

Instead, robbed of so many key players, Alty boss Parkinson had to make what he could of the resources at his disposal, and that included debuts for loan pair Tom Walker and Barry Baggley almost before they had been introduced to their new team-mates.

Not that Stockport County winger Walker or Fleetwood Town midfielder Baggley looked the least bit discomfited by being rushed into action, as both featured prominently in a positive Alty start.

Both players had already linked up well on the left flank in the ninth minute when, six minutes later, Walker combined superbly with Josh Hancock to set up an opening that Baggley seized on unerringly to finish confidently and emphatically past Ryan Boot from 12 yards.

What a way to announce yourself to a bumper home crowd by the 19-year old Northern Ireland under-21 prospect and what a dream opening for a severely-depleted Alty team, much to the delight of a bouncing home support.

There was more to come from Walker in the 19th minute with a brilliant turn that left his marker standing, followed by a pass to Jake Moult that led to Tom Peers being teed up for a shot that curled narrowly wide.

Another astute pass, this time from Dean Furman, gave Hancock the chance to fire a shot that Boot turned round the post at full stretch in the 31st minute, as Alty continued to impress.

The best Solihull could muster by way of a reply was a Callum Maycock effort that cleared the bar in the 40th minute, and they were soon on the back foot again as Furman forced a defensive mistake and gave Hancock the chance to unleash a rasping drive that flew narrowly over.

If it had been an encouraging first 45 minutes for the Robins, the second half could hardly have started any worse.

Inside 60 seconds, Solihull were level as a slick passing move on the right of the area ended with Justin Donana bursting into space and firing past Matt Gould to make it 1-1.

That seemed to knock the stuffing out of Alty, though Joel Senior did his utmost to breath new life into his flagging team-mates in the 66th minute, cutting through a gap that didn’t seem to exist on the right before sending a shot flashing across the six-yard box and just past the far post.

It was all to no avail, though, as Solihull struck the killer blow in the 72nd minute, substitute Joe Sbarra playing a one-two and coolly slotting the ball past Gould, who found himself unprotected for a second time.

Though not at their best in the second half, Alty went agonisingly close to an equaliser in the 85th minute when Jake Moult brilliantly released Walker down the left for a cross that was met beyond the far post by Baggley, whose deft first-time flick with the outside of his left boot sent the ball spinning back towards, but ultimately just wide of, the opposite upright.

Gould denied Solihull a third goal with an outstanding reflex save from Donana in the 87th minute, and that so nearly proved significant in stoppage time when Peers tried to convert Moult’s low cross at the near post, only for Boot to smother the danger with a brave dive at the striker’s feet.

It was not to be, but at least, in the mutual applause that rang out between Parkinson and his players and home fans at the end, there was acknowledgement of the effort put in under trying circumstances and hope that special occasions such as this will become the norm, as Alty continue to prosper on and off the pitch.