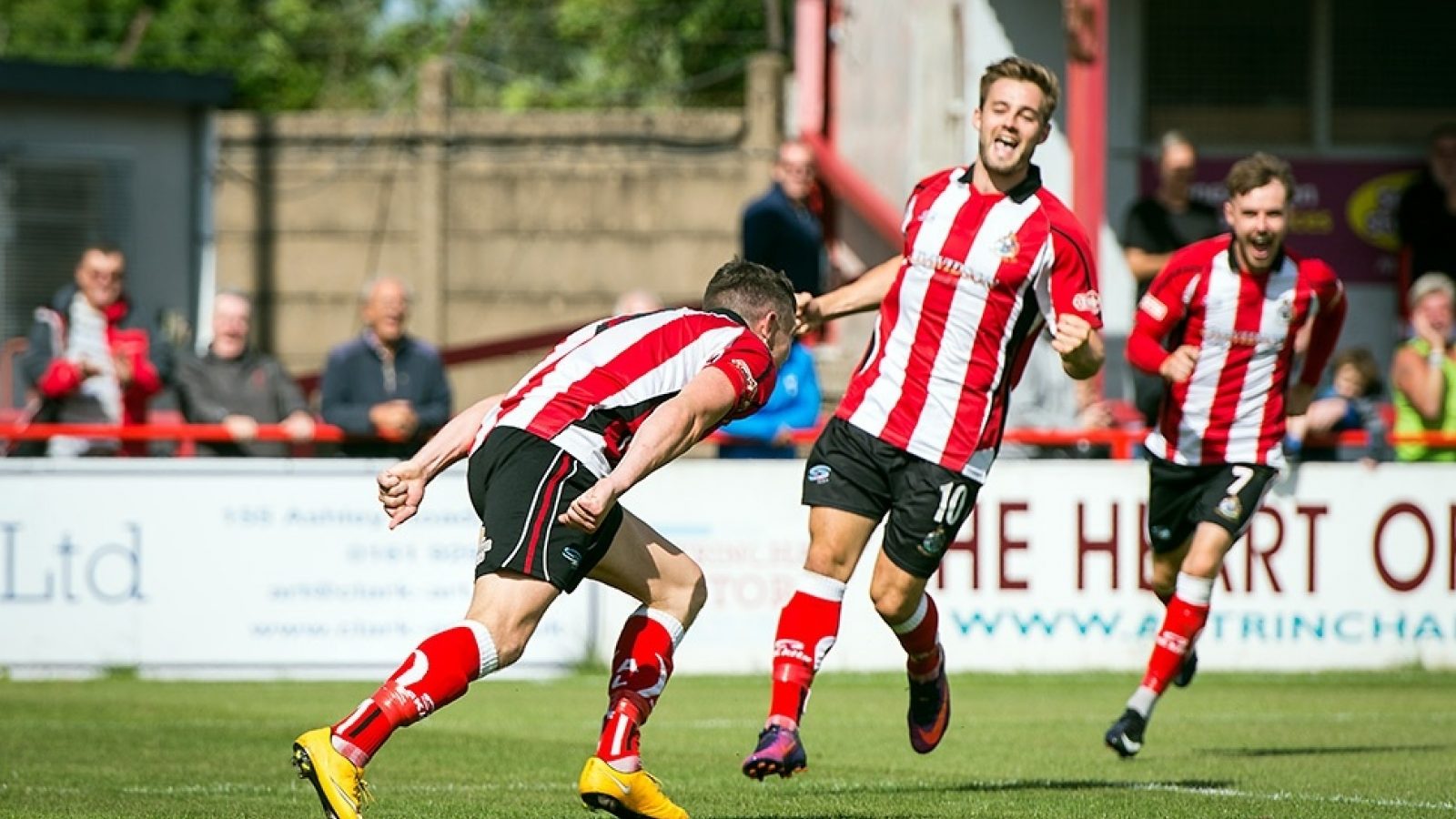 It took an unfortunate late own goal by James Jones to separate Altrincham and big-spending Vanarama National League side Salford City in their final pre-season friendly at The J.Davidson Stadium on Saturday.

Trailing at the break, Alty looked capable of adding another name to their list of summer scalps, as ex-Salford striker Jordan Hulme equalised from close range and new arrival Brendon Daniels forced an outstanding save from keeper Max Crocombe.

Instead, Jones’ stroke of misfortune in the 83rd minute condemned Phil Parkinson’s side to a 2-1 defeat that will do nothing to dampen spirits, given the way they more than matched a team who will be among the favourites for promotion to the Football League this coming season.

With John Johnston again showing a willingness to run at defenders in his usual pacey, direct style and Alty’s midfield in control early on, Salford were given a stern test of what to expect in the National League in a first half bossed by the Robins.

Some impressive approach play frequently stretched Graham Alexander’s side, not least when Andy White directed a pass towards the near post, where Josh Hancock’s attempt to flick it past Crocombe just failed to pay off, as Salford scrambled it behind for a corner.

Alty haven’t always made the most of corners, but their delivery on Saturday often had Salford struggling to keep their goal intact, as Jones and James Moult both won headers that could have broken the deadlock.

When the opening goal came, it was against the run of play at the other end and in controversial circumstances. A studs-first lunge by centre-back Nathan Pond on Johnston somehow sent unpunished by referee Ben Speedie, and when the ball was subsequently played into the Alty area, striker Rory Gaffney had time to steady himself before firing a left-foot shot past an unprotected Tony Thompson.

Salford had bizarrely taken the field without numbers on their backs – evidently in an attempt to make life difficult for a watching scout from next Saturday’s National League opponents Leyton Orient – but there was no fooling the provider of match updates on Alty’s website, who described the scorer as ‘No 9, Rory Gaffney.’ Quite right, too!

There was no fooling Alty boss Parkinson about the questionable validity of the goal, either, as he complained to referee Speedie on the way off at half-time, pointing to the overly-aggressive challenge by Pond, but to no avail.

Undeterred, Alty started the second half in the same positive fashion that marked their first-half endeavours and were deservedly level in the 49th minute, as Hulme’s goalscoring instincts again brought their rewards.

Hancock turned smartly on the edge of the area and hit a low shot that the diving Crocombe could only turn on to the inside on the left post. As the ball trickled agonisingly along the line, Crocombe scrambled to his feet in a desperate attempt to retrieve it and Hulme closed in from his predatory position on the edge of the six-yard box.

There was only going to be one winner, and the Alty marksman forced it past the keeper’s outstretched arm to take his personal tally to a hugely-impressive six goals during what has been a highly-encouraging build-up to the new season.

Daniels, signed on a one-month loan from Port Vale, had already showed some neat touches in the first half by finding space to deliver crosses from the left when seeming to be tightly marked, and he demonstrated another side to his game when Alty won a free-kick 25 yards out after an hour.

The defensive wall looked to be well constructed, but Alty’s left-sided attacker hammered a blistering drive that flew through it and appeared bound for the corner of the net, until Crocombe tipped it away at full stretch.

With Alty’s endeavour and enterprise deserving to be reflected in the scoreline, it came as a cruel blow when a left-wing cross was diverted past substitute keeper Elliot Wynne by Jones’ miscued attempt to hook it clear.

Even so, the abiding impression from an upbeat pre-season programme is that a group of players who are all on the same wavelength after mostly being together for the past 12 months are well equipped for a challenge that begins with a home Vanarama National League North fixture against Leamington next Saturday.