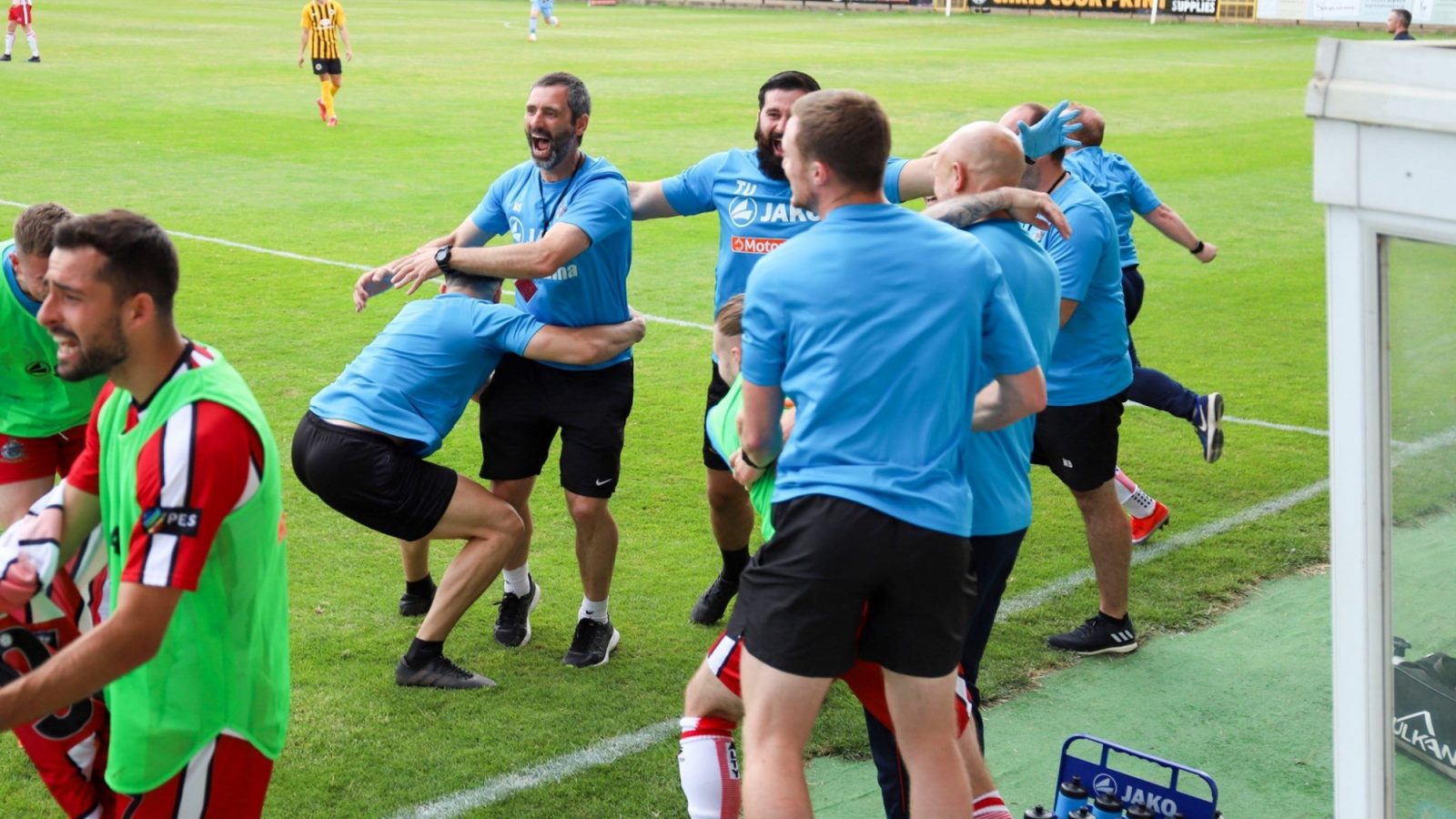 This wasn't the same assured, polished Alty we saw at Bootham Crescent a week earlier, but it hardly mattered. The result was the same; that's what mattered. It was another win, and what a win. What a moment when, with victory assured and a place in the Vanarama National League secured, skipper Jake Moult lifted the promotion final trophy to a chorus of 'We are going up' from his elated team-mates.

It was a scene that captured the ups and downs of football, the sheer ecstasy and utter despair, as Alty's players and staff celebrated their special achievement while their vanquished opponents sat - or in some cases lay flat on their backs - in the centre circle.

Tough on the Pilgrims, who had been firmly in charge in a worryingly one-sided first-half, but who can quibble with the latest triumphant chapter in the success story being penned by manager Phil Parkinson and his assistant Neil Sorvel?

Such has been the transformation, the winning mentality instilled since they took over three years ago, that even when the Robins were under the cosh in the first half, you sensed Phil and his sidekick would find the right words to turn it round.

So it proved, as Dan Mooney pounced on a goalkeeping howler to score the all-important goal and Alty held out with commendable ease to make it two promotions in three seasons under Parkinson and Sorvel.

The opening exchanges were as tight and tense as might be expected with so much at stake. Both sides seemed determined to deny their opponents an early breakthrough, but it was Alty who were facing the tougher task keeping their goal intact.

Jordan Thewlis cut in from the left in only the third minute and hit a shot that might have troubled Tony Thompson but for Toby Mullarkey's outstretched boot diverting it to safety.

Josh Hancock answered with a curling 25-yard free-kick that flew narrowly wide of the right-hand post, but it was to prove a rare attacking threat by Alty in a Boston-dominated first half.

Thewlis appealed for a penalty after tumbling theatrically over Simon Richman in the seventh minute. It was stretching optimism to the limit, but with Boston's two debatable spot-kicks in the semi-final against Gateshead fresh in the mind, there were still one or two anxious glances towards the referee before Alty could breathe a sigh of relief.

Boston lost striker Jake Wright to what looked like a hamstring injury in the 13th minute, but it did little to disrupt their rhythm.

Indeed, his replacement Dominic Knowles thought he was in for an opener just two minutes later.

Alex Whittle's left-wing cross looked perfect for the lurking Knowles, who would surely have scored from the edge of the six-yard area but for Tom Hannigan's straining forehead doing just enough to glance it beyond his reach.

The Boston substitute was in the thick of it again in the 18th minute, receiving a low right-wing cross with his back to goal and teeing up a chance for Tom Platt, whose goalbound effort was blocked by Mullarkey.

It was all Boston, and they went close again in the 27th minute when an Andi Thanoj cross from the left just evaded the onrushing Platt's outstretched boot at the far post.

The half ended as it started, with Boston on top and threatening to break the deadlock, as Luke Shiels met Brad Abbott's free-kick with a first-time volley that comfortably cleared the bar.

Alty boss Parkinson looked pensive as he made his way off, doubtless reflecting on his side's failure to make anything like the impact that carried them through against Chester and York.

If there were a few well-chosen words in the dressing room at half-time, they appeared to have had the desired effect.

It was much more like it from the Robins, keeping possession, patiently probing and finally putting keeper Peter Crook to the test.

Mullarkey had been a tower of strength at the back, but he showed he can power forward as well in the 47th minute as he strode past two challenges and attempted a one-two with Josh Hancock.

A defender's boot inadvertently completed the exchange, and Mullarkey suddenly found himself in space on the edge of the area for a shot Crook saved with ease.

These were distinctly promising signs, and there were more to come in the 52nd minute when Jordan Hulme won the aerial challenge for an Elliott Durrell cross and headed narrowly wide from the edge of the six-yard box.

Alty's marked improvement led to a priceless breakthrough in the 64th minute, albeit with a helping hand from the hapless Crook.

The chance looked to have been lost when Durrell hesitated over trying his luck from the edge of the area. His delayed shot was charged down by a crowd of defenders and looked to be rolling harmlessly back to Crook, only for the keeper to inexplicably spill the ball at the feet of the lurking Mooney, who couldn't miss from a couple of yards out.

There was still half-an-hour left, and it should have felt like an eternity. In truth it didn't. To Alty's enormous credit, they saw out time with hardly a scare to spark scenes of wild jubilation when the final whistle sounded. It's six years since Alty last reached the National League via the play-offs, and the intervening seasons have been eventful, to say the least.

We looked to be in freefall to begin with, but then Phil and Neil arrived from Nantwich and we haven't looked back. We're not about to, either - not with a Vanarama National League campaign to look forward to in a couple of months.