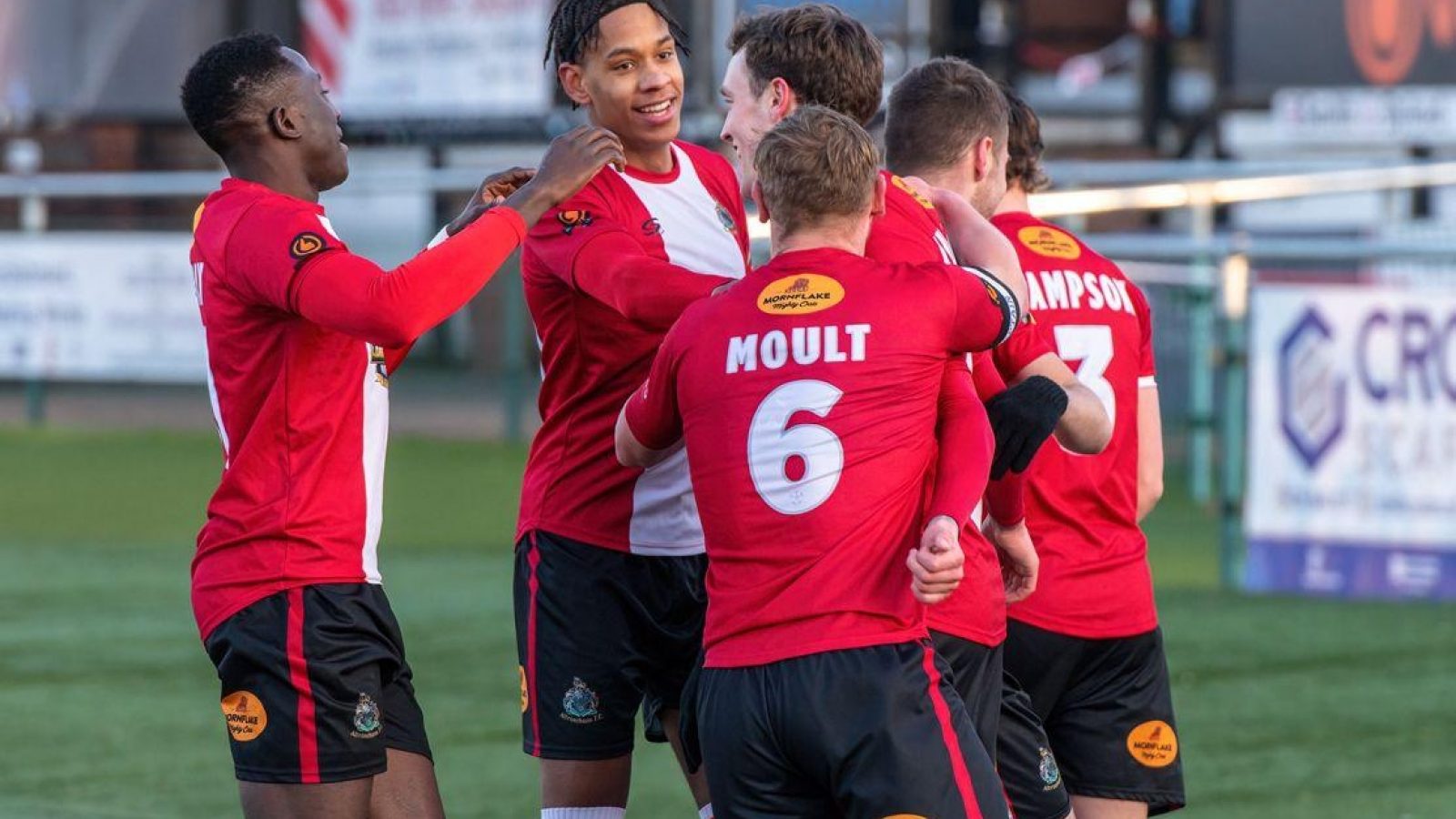 *Here to stay .. a smiling Alistair Smith congratulates Toby Mullarkey on his goal at Sutton United. Picture by Michael Ripley.

Altrincham are delighted to announce a major transfer breakthrough after completing the signing of Alistair Smith on an 18-month deal.

Just as Alty fans were anxiously wondering whether we might be able to borrow the influential Mansfield midfielder a little longer, as the final days of a highly-successful loan ticked away, behind-the-scenes negotiations were taking place to make him a Robins player on a permanent basis.

They were successfully concluded this afternoon, with jubilant Alty manager Phil Parkinson able to confirm that the talented 20-year old has signed a deal that will keep him at the club until the end of next season, at least.

It is a massive coup for Parkinson that he managed to convince Smith, in the face of rising competition from rival clubs, that his career prospects would be best served at The J.Davidson Stadium after Mansfield agreed to release him.

Reflecting on mission accomplished in his quest to add Smith to a squad that looks increasingly well-equipped to deal with the challenges of the Vanarama National League, the Alty boss beamed:

“I am delighted we are able to announce this after the success of Alistair's loan period with us and a number of conversations with him. He expressed a desire to sign permanently for us, and after negotiations with Mansfield, we were able to come up with an agreement to make it happen.

"I think everyone can see the impact Ally has had since joining us, and it would have been remiss of us not to try and sign such an exciting young talent on a permanent deal, once we knew it was possible.

"This yet again demonstrates the ambition of the club, even during difficult times, to make positive movements to ensure it remains and becomes successful at this level and hopefully, one day, at the one above."

Smith, a multi-talented midfielder who mixes elegance with a hard, competitive edge, arrived on an initial one-month loan from Mansfield in mid-November and made an immediate impact on his debut by going on in the 72nd minute against Aldershot and laying on a goal for Tom Peers in a 2-1 home defeat.

He has since reeled off 11 league and cup starts, growing in stature with each appearance and stamping his authority on a sharp upturn in Alty’s fortunes in a division packed with big-spending full-time clubs.

That was never more evident than in the recent game at Stockport County when he provided two assists, as Alty stormed back from 2-0 arrears with a stunning second-half fightback that salvaged a 2-2 draw.

Midway through that sequence of appearances, Alty requested an extension to his loan for a second month, and when it became apparent there was a possibility the arrangement could be made permanent, Parkinson wasted no time moving for a player who has settled seamlessly into the Robins dressing room and quickly become a highly-valued and popular figure at the club.

On behalf of everyone at The J.Davidson Stadium, Alistair, a very warm welcome to the ranks of permanent Alty players!

Alistair Smith's home, away and third shirts are now available to sponsor. Guarantee yourself a signed 'Smith 29' shirt by clicking the link below and sponsoring the latest Robin.