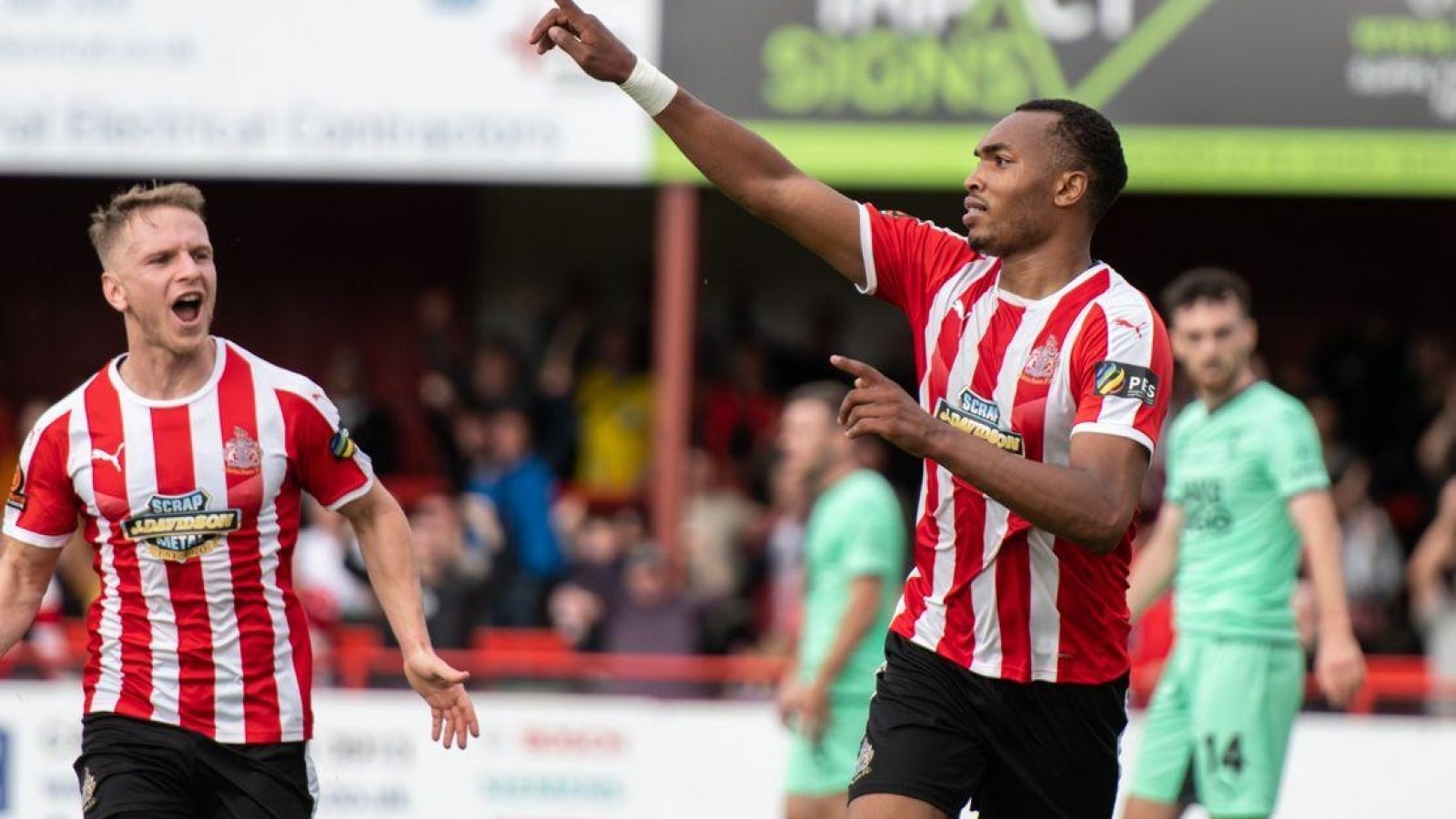 *Marksman Marcus .. the ball is in the net, and goalscorer Marcus Dinanga takes the acclaim of team-mate Matty Kosylo. Picture by Michael Ripley.

A poacher’s goal by Marcus Dinanga proved decisive as Notts County were added to Altrincham’s ever-lengthening list of big-name scalps at a sun-baked J.Davidson Stadium this afternoon.

Dinanga’s sharp 29th-minute finish was enough to tilt a closely-fought encounter Alty’s way, and there could be few complaints from County or any of their 800 or so travelling fans about losing in the Vanarama National League for the first time this season.

By common consent, there was little to choose between the two teams - and what a remarkable tribute that is in itself to the progress Alty have made under manager Phil Parkinson.

Part-time Alty, newly-relegated to the Northern Premier League when the former Nantwich boss took over as recently as four years ago, versus the oldest professional football club in the world with a proud League history that includes a brief spell in the top flight in the early 1990s.

Poles apart on paper, from the sounds of it, but not on the pitch. With skipper Jake Moult snapping at heels in the centre of midfield, Ryan Colclough, Matty Kosylo and Dan Mooney all proving a handful and defensive resilience spreading from one side of the pitch to the other so effectively that Tony Thompson was rarely troubled, Alty were more than a match for their illustrious visitors.

Then there’s Dinanga, who breezed into Moss Lane in the summer and thought nothing of sending expectations through the roof, and piling pressure on himself in the process, by calmly announcing that if his team-mates laid on the service, he would deliver the goals.

He was as good as his word in strength-sapping conditions against one of the title favourites, and if it was only his second goal of the campaign so far, there was an alertness about the way he took it that suggests plenty more may well follow.

A flowing move led to Dan Mooney rolling the ball out to Ryan Colclough, who looked to be having a pop at goal when he drilled the ball towards the far post from the left edge of the area. That’s how it appeared, but Dinanga was assuming nothing and was on the move the instant Colclough let fly, enabling him to stretch out a boot and divert the ball over the line, just as it was about to drift wide.

It was anticipation and movement of the highest order and no more than Alty deserved after Colclough fired narrowly wide of the near post in only the fifth minute and Mooney stung the keeper’s hands with a fierce effort after cutting in from the right.

The Magpies’ only reply had been a header that Kyle Wootton wastefully steered over in the 17th minute, though they should have been back on terms in the 41st minute when Matty Palmer looked to have done the hard part by chesting the ball down, only to volley over from close range.

Keeping the threat of Colclough in check is a thankless task for anyone, and a whole line of County defenders found it beyond them when Alty won a free-kick 20 yards out in the 57th minute.

The irrepressible Alty winger stepped up and unleashed a shot that flew through the wall, only for keeper Anthony Patterson to deny him with a fine save.

A second goal might have settled any nerves in the home ranks of a sizeable 2,569 crowd, and it almost materialised when Kosylo set up Mooney for an effort that was sliced wide in the 63rd minute.

With County kicking towards the end housing their fans, and a point the least they might have expected from a trip to Moss Lane, a late siege of the Alty goal was surely on the cards. To the Robins’ endless credit, it never materialised.

Thompson had to be alert to react in time to a glancing header from Ruben Rodrigues, raising his arms and catching it above his head, and the same player went close in the 72nd minute after livewire second-half substitute Aaron Nemane reached the by-line on the right and cut the ball back.

It was otherwise relatively serene progress towards a final whistle that finally arrived after five minutes of added time to signal a rapturously-received and richly-deserved win secured by a predator’s finish from Dinanga, whose overall play, as well as his goal, made him a popular recipient of the man-of-the-match award.